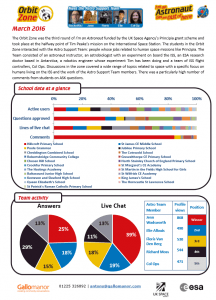 The Orbit Zone was the third round of I’m an Astronaut funded by the UK Space Agency’s Principia grant scheme and took place at the halfway point of Tim Peake’s mission on the International Space Station. The students in the Orbit Zone interacted with the Astro Support Team: people whose jobs related to human space missions like Principia. The Team consisted of an astronaut instructor, an astrobiologist with an experiment on board the ISS, an ESA research doctor based in Antarctica, a robotics engineer whose experiment Tim has been doing and a team of ISS flight controllers, Col Ops.

Discussions in the zone covered a wide range of topics related to space with a specific focus on humans living on the ISS and the work of the Astro Support Team members. There was a particularly high number of comments from students on ASK questions.