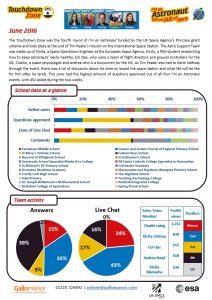 The Touchdown Zone was the fourth round of I’m an Astronaut funded by the UK Space Agency’s Principia grant scheme and took place at the end of Tim Peake’s mission on the International Space Station. The Astro Support Team was made up of Vinita, a Space Operations Engineer at the European Space Agency, Kirsty, a PhD student researching how to keep astronauts’ backs healthy, Col Ops, who were a team of flight directors and ground controllers for the ISS, Charlie, a space physiologist and Andrea who is a Eurocomm for the ISS.

As Tim Peake returned to Earth halfway through the event, there was a lot of discussion about his time on board the space station and what life will be like for him after he lands. This zone had the highest amount of questions approved out of all four I’m an Astronaut events, with 452 asked during the two weeks.